Sinatra Through the Early Years

The vocal legend of all times started as a singer in the most popular time of the Big Band Era – which was a dream come true for Frank Sinatra. He was at center stage during one of the most exciting times in modern music: the glory days of swing.

He started his nationally known singing career with a short stint in 1939 with Harry James & His Orchestra. But, by early 1940 he was on his way touring the nation and singing with the Tommy Dorsey Orchestra.

From the moment he appeared on stage at the New York’s Paramount Theatre, he walked into the annals of show business. The sounds that he was greeted with, he recalls, “was absolutely deafening, a tremendous roar from 5000 bobby-soxers.” They packed the Theatre yelling, screaming, applauding – even fainting in ecstasy – for Frank Sinatra who had become a super-star.

American music would never be the same after April 1940 as Sinatra recorded with the Pied Pipers and Dorsey, their first big hit I’ll Never Smile Again which became the first Dorsey/ Sinatra/ Pied Pipers record to reach number one on the charts. By August, I’ll Never Smile Again had sold 500,000 records and was listed on Billboards charts as a number one hit for 15 consecutive weeks and continued as a top 10 hit for 25 weeks. Billboard Magazine quoted, “the success of this song is due to the plaintive delivery by Sinatra and the elegant harmony by the Pied Pipers.” Many hits followed within that year, This Love Of Mine, Oh, Look At Me Now, There Are Such Things just to name a few.

The success of I’ll Never Smile Again catapulted Frank to stardom and gave him top billing with the Pied Pipers in the October 1940 Paramount movie “ Las Vegas Nights” which was released nationally. Within a few months another movie called “Ships Ahoy” featuring Frank and the Pipers was hitting the movie theaters.

Frank was also recording as a soloist, featuring his poetic renditions of Night And Day, Without A Song and The Song Is You. But in 1942, after listening to what he had recorded, he said, “I’ve got to go out on my own!” 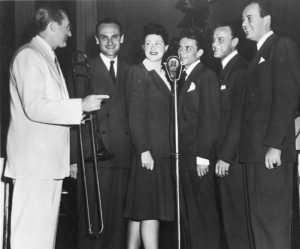 Though he loved and admired Dorsey, it was time to move on. To Dorsey’s dismay – Sinatra broke his contract by saying, “I’ll make you an offer you can’t refuse…………!” The crooner never looked back as he continued to make movies, was the featured vocalist on the hit radio show “Your Hit Parade” and signed a recording contract with Columbia Records. After a cameo part singing Night And Day in the movie, Reveille With Beverly – the timing couldn’t have been more perfect to spread the word from coast to coast about America’s teenage idol.

His voice continued to touch us for decades as he recorded numerous hit records, had his own television shows and guest appearances on many others, sixty movies to his credit, many legendary shows in Las Vegas and historic performances that traveled the world.

Sinatra, through the early years made musical history and changed American Music forever. Frank Sinatra, the man with the voice will live infinitely.